The following is a post from Akkerman. For more details and additional job site photos, visit their website.

Northwest Boring Co. Inc. (NWB) of Woodinville, WA was subcontracted by Shoreline Construction for an emergency replacement of the City of Mill Creek’s failed 30-inch CMP stormwater pipeline that had been causing flooding in the suburban neighborhood, just north of Seattle.

The need for the stormwater system’s repair became apparent when a sinkhole appeared in December 2017, between the Sweetwater Ranch and Douglas Fir neighborhoods. Temporary repair work was conducted, but another sinkhole developed in the same location just one month later. After inspection, it was determined that a failed coupler and damage to the 36-inch corrugated metal stormwater pipe was the root cause.

Because the City of Mill Creek had declared this an emergency project with a budget less than $300,000, a public bidding process was not required. Shoreline Construction was selected as the contractor, who subcontracted the trenchless work to NWB. 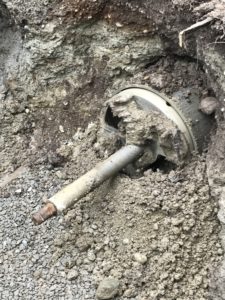 The alignments scheduled for replacement were positioned within a narrow easement between two homes at an 11-foot depth in difficult ground. With minimal real estate, the depth of installation and geological conditions, NWB knew that their guided boring system would be an ideal installation choice for the new stormwater connections.

NWB employed the use of their Akkerman GBM 4800 Series Jacking Frame with a high-torque casing adapter attachment for auger boring. The combination made it possible to install the pilot tube passes and 10-foot pipe segments with the torque and jacking force of an auger boring machine but within a smaller shaft. The design utilized one launch shaft to initiate the runs from both directions which further reduced disruption to resident’s properties and saved on project costs.

The ground conditions present were glacial till with rock, which is typical for this region. This ground cannot be displaced with a standard pilot tube steering head so NWB arranged to use special tooling for up to 12,000 psi UCS ground. The drill bit of choice, the Rock Drill Adapter with TriHawk® drill bit, lead the pilot tube passes which established the 140 and 110-linear foot alignments at the necessary line and grade for gravity flow. Simultaneously, a soil appropriate lubrication regime was applied to flush the excavated cuttings back to the launch shaft for removal. (continued)

Crews then prepared to direct jack the 110 and 140-linear foot, 36-inch steel casing. In advance of the casing, NWB launched a guide rod swivel with a 36-inch cutter head which matched the 36-inch casing diameter. The swivel portion of the tooling absorbed the auger rotation while the cutter head, equipped with durable carbide gage cutter bit tooling, excavated the difficult ground. This second pass was completed with the guide rod swivel with cutter head for both stormwater sections.

The alignments were then finished with 27-inch Vylon® carrier pipe was positioned inside the casing and connections to the existing infrastructure were made.

From start to finish the entire project was finalized in just under a month, resolving the City’s dilemma in a timely manner with minor intrusiveness to residents.