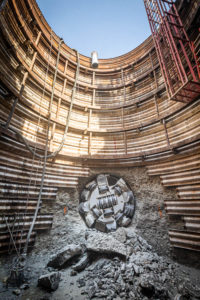 The machine completed the Parmer Lane Wastewater Interceptor in Austin, Texas, USA for contractor S.J. Louis Construction. Despite obstacles including two tight curves of 150 m (500 ft) radius and unexpected ground conditions that required modification of the cutterhead in the tunnel, advance rates were good. The machine reached up to 380 m (1,250 ft) per month while mining in single 12-hour shifts per day. “It was a hard rock TBM, and it performed better than expected through hard rock,” said Zach West, Project Manager for S.J. Louis. 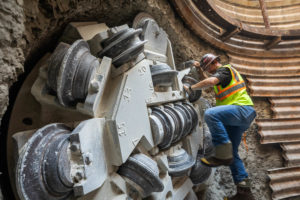 The challenges for the TBM and its crew were varied, explained West. “The pairing of this tunnel length, which is on the longer side, and the diameter, which is on the smaller side, is challenging.  The survey in a small tunnel with tight radius curves and limited surface access for over two miles is very difficult.” He added that the shallow tunnel depth, and the alignment to within a few feet of sanitary lines, high-pressure gas mains, and fuel tanks for gas stations, made TBM guidance critical.  “I would say that I am most proud of our ability to guide the machine successfully through these obstacles and into our retrieval shaft within our expected tolerances.” 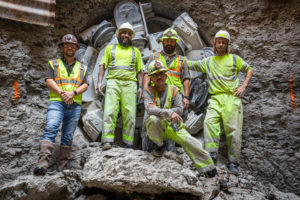 Through one stretch, the tunnel advanced directly between a 30 cm (12 in) diameter, high-pressure gas main and fuel tanks for a gas station with limited as-built information.  “Navigating this section took a great deal of coordination with the local utility companies.  Because the tunnel diameter was too small for an automated guidance system, we manually surveyed the front of the machine at every push to ensure the machine was on track,” said West.

“I’m proud that they mined the longest tunnel to date for a small shielded gripper machine of this size without any safety issues.  Kudos to their management philosophy and jobsite team,” said Tom Fuerst, Robbins Utility Tunneling Sales Manager. Robbins assisted the crew while in the tight 150 m (500 ft) curves and helped with modifications required to the cutterhead and disc cutter arrangement. 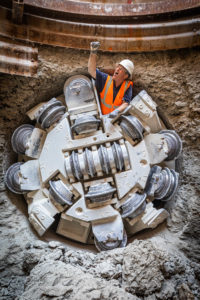 The tunnel is located in an environmentally sensitive aquifer, with ground conditions ranging from soft dolomite with clay to limestone from 13 to 68 MPa (2,000 to 10,000 psi) UCS.   “While we tunneled through the softer material, our best advance rate was close to 0.9 m (3 ft) per hour.  When we tunneled through the expected limestone, advance rates were over 5.2 m (17 ft) per hour.  Our best day was 25 m (81 ft) in a single shift,” said West.

The majority of the tunnel used a simple two-rock-bolt pattern for support.  In the last 10% of the tunnel, ribs and lagging were used as support. Final carrier pipe, which is now being installed, consists of 110 cm (42 in) diameter fiberglass pipe.

The successful project is part of a larger trend towards small diameter, TBM-driven rock tunnels in the United States, says Fuerst. “It is primarily due to demographics and business growth.  The parts of the USA that are growing need to build out their sewer and water infrastructure. TBMs can mine long distances with tight curves.  They can reduce the need for multiple shafts, which lowers the overall project cost.  And, given that most small diameter pipelines follow a road or municipal right-of-way, traffic problems are reduced significantly compared with open cut operations.” 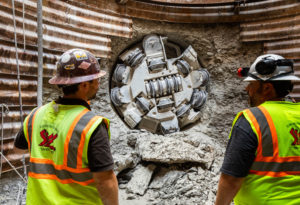 The Parmer Lane Wastewater Interceptor connects to two existing lift stations at Lake Creek and Rattan Creek.  The tunnel allows for these lift stations to be decommissioned, and will provide additional flow capacity by gravity, reducing operating costs for the City of Austin.

Image 3: The S.J. Louis Construction crew celebrate the successful and safe completion of the Parmer Lane Wastewater Interceptor with a Robbins TBM.

Image 5: The Robbins TBM bored through dolomite with clay and limestone at rates of up to 380 m (1,250 ft) in one month while mining in single 12-hour shifts per day.