Chris Brahler has been a leader in the underground and trenchless construction industries for over 40 years. 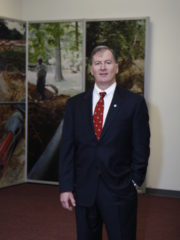 Chris Brahler has been a leader in the underground and trenchless construction industries for over 40 years.  Chris received a bachelor’s degree in marketing and business administration in 1974 and began his career in the cable installation equipment market that same year.  Early on, Chris worked with several different pieces of cable installation equipment and soon developed an interest in trenchless technology.

In 1975, he helped secure an arrangement with Tracto-Technik in Germany to bring several trenchless product lines to North America.  In 1991, Chris started TT Technologies, Inc., Aurora, IL, a manufacturer of trenchless tools and equipment.

As President and CEO of TT Technologies, Chris has worked tirelessly with water, wastewater and gas utilities, plumbers, telecommunication companies, engineers and contractors to promote the value of trenchless technology and help build the market in North America.  Over the years, he has dedicated the time and resources needed to develop, improve and refine trenchless equipment, methods and solutions.

He has been a featured presenter at conventions and conferences around the country, as well as in Canada, Mexico, China and South America, helping develop emerging markets for trenchless technology.

In 2007, he was chosen Trenchless Technology Magazine’s “Trenchless Person of the Year.”  He has served on the No-Dig Trenchless Committee, the marketing and management committees for ICUEE, DCA’s Board of Directors and the NUCA Trenchless committee. In 2009, Chris began a term as NASTT Board Chairman and in 2014 he received the Lifetime NASTT Chair Service Award.

Chris possesses the extraordinary gift of the ability to get things done. He has helped propel the trenchless industry toward the mainstream of construction methodologies.  His contributions and service to NASTT have helped strengthen the organization and advance its mission. He is an educator, mentor, leader and innovator.