John Hemphill is the former Executive Director of both NASTT and ISTT. 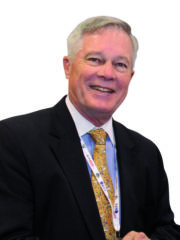 As Executive Director of the North American Society for Trenchless Technology, John Hemphill played a significant role in programs to educate members of the trenchless industry and general public throughout the US and Canada about the benefits of trenchless construction. While at NASTT, Hemphill coordinated the Horizontal Directional Drilling (HDD) Consortium’s development and publication of HDD Good Practices guidelines. Also during his tenure as Executive Director, the Society’s educational programs were significantly expanded, membership increased, the annual No-Dig Show grew in size and scope, and good practices guidelines were developed for other trenchless procedures.

Hemphill joined NASTT staff in 1998 and soon became the Society’s Executive Director. But Hemphill’s introduction to trenchless technology preceded his affiliation with NASTT by more than a decade. He early on recognized the potential of trenchless applications and, as a management consultant in the early 1980s, recommended that a construction company expand its product line to include trenchless methods.

Hemphill’s career highlights include serving as the American Society for Civil Engineering’s first Congressional Fellow. He also served as the Assistant Director of Energy Policy at the International Energy Agency in Paris, France and as Deputy Energy Policy Director with the US Department of Energy, in Washington D.C. He is a civil engineering graduate of the University of Oklahoma, with a Masters of Science in Civil Engineering from the University of Maryland. He resides with his wife, Holly, an attorney, in Alexandria, Virginia.