George Ragula is a recognized leader in the industry and has spent the last 31 years of his 40 year career in the gas industry committed to the ever-growing technologies in trenchless construction. 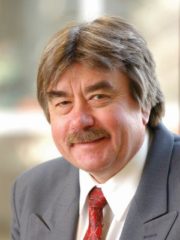 George has a very diverse background in gas distribution engineering and operations during his extensive career in the gas industry.  Prior to joining Public Service Electric & Gas (PSE&G) in 1988, he held various positions at Brooklyn Union Gas in engineering, operations, construction and management.

He is a member of the American Gas Association (AGA) where he services as Vice-Chair of the Construction Operations Committee, American Society of Mechanical Engineers, Society of Gas Operators where he served as President from 2014-2015, and the New Jersey Society of Asphalt Technologists.  He serves as Treasurer of the Northeast Gas Distribution Council and was actively involved as a Project Advisor for the Gas Technology Institute Operations Technology Development Program. George served as Chair of the Board of Directors for the North American Society for Trenchless Technology from 2011-2012 and served as Program Chair for the Annual No-Dig Conference in 2012. In addition, he served as Chair of the NYSEARCH – Northeast Gas Association R&D Committee from 2004-2006 and continues to serve as a technical project advisor for that group. George also previously served as a Distribution Project Advisor for the Gas Research Institute for 15 years.

He received his BS Mechanical Engineering from Polytechnic Institute of Brooklyn in New York.

George is an avid technical diver, enjoys skiing and is a corvette collector where he competes in amateur racing.