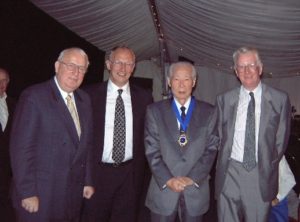 It is with regret, but much fondness, that we remember the life and contribution of ISTT Chairman Emeritus Ted Flaxman who died December 8, 2020, aged 92.

Ted (EW) Flaxman, Fellow of the Institution of Civil Engineers, had a distinguished career with Binnie and Partners (now Black and Veatch). As Past President of the Institution of Public Health Engineers (IPHE), he chaired the organizing committee of the IPHE Conference “Trenchless Construction for Utilities,’’ the 1st No-Dig Event in 1985. In his concluding address, he proposed a series of international trenchless events, the formation of the International Society for Trenchless Technology (ISTT), an industry journal, and an annual prize for innovation.

With customary vigor, he made all of these promises happen, and ISTT was established in 1986. Ted served as its Chairman from 1986-2003 and as a Guarantor until 2016. In 1988 he was elected as a Fellow of the Royal Academy of Engineers. He received the Kurose Award in 1993 and the UKSTT’s Lifetime Achievement Award in 2014. Ted was Master of the Worshipful Company of Water Conservators in 1996 and with Ted Jackson he published a “Sweet and Wholesome Water-five centuries of the history of water bearers in London.”

A much accomplished leader, visionary and friend who did much to encourage generations of trenchless technologists, he had a keen wit and joked that his epitaph should be ‘Ted Flaxman fled taxman’!